Hello! The parade continues. I did start my stitchmaynia piece yesterday and here it is.. 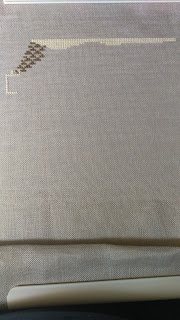 This is Kringle by LHN, on a huge piece of 30ct Parisian Gray linen by Access Commodities. It's a coarse-feeling linen that'll hold up well with this big design that is 193w x 232h. The whitish color is snow and the brown is roof. What I have stitched is half of the building! I plan to stitch on Kringles for 15 or 16 days and then switch to the Halloween stitch that I mentioned last post.
Parade time! 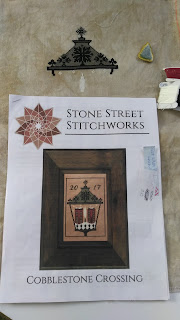 A nice Christmas/Winter scene, the designer is on Etsy. I decided to leave off the border but I'm not sure about the date. I may leave it off too.
Next.. 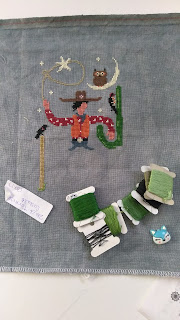 Aww, it's my cowboy by Ink Circles, Beau Leggy in the Desert. There's a cactus bush underneath his legs that needs to be stitched and that's it! He's nearly done. 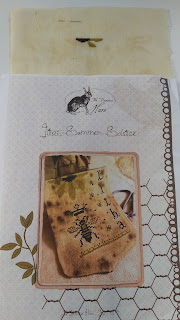 Litha by the Primitive Hare. Yep, that is all I have stitched! I still like this pattern so I'll keep it. 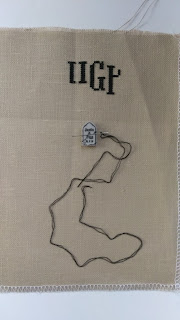 This is Midnight Manor by Waxing Moon. I want to start stitching on this again. Soon. 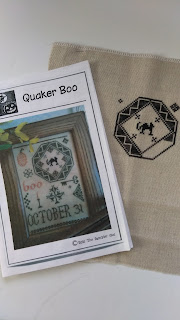 From The Sampler Girl. A nice Halloween design that would be awesome as a cube. 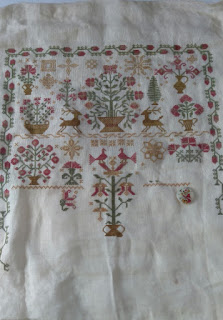 Christmas Garden by BBD. New year's day picture that looks no different! Haha. Another WIP that deserves to be worked on. 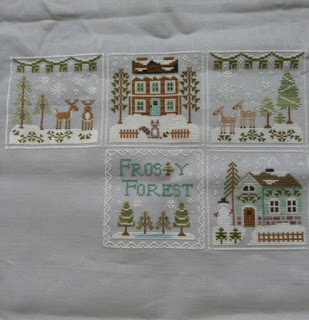 And the last WIP for this sunday's parade is Frosty Forest by CCN. Just 4 more blocks to do!
Come on retirement!! That is when I can stitch to my heart's content. I have 7 more years to go. No telling what will happen by then. I may win the lottery or marry old money, haha!
That's it for this week's parade. I'm starting to get into WIPs from my bday SAL but I'll show them again.
Jo, I think I'll join you on your longest day of the year WIP challenge. I believe that is Summer Solstice? I'll have to look up what day that is. If it's on a weekend, it's all good. If not, I'll do what I can. Pulling all these WIPs from their hiding places makes me want to work on them. Thanks Jo!
Stay safe and healthy everyone!

Popular posts from this blog 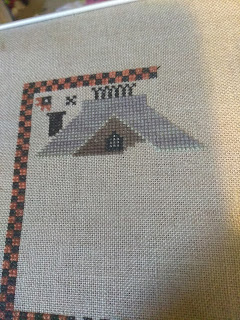 Hi all! Hope you're all doing well! Thanks for commenting on my inaugural post 2 weeks ago. Since I'm not posting from my iPad, I can now get long-winded here! I thought I would mention what is happening at this new blogger format using my iPad. When I'm at the new post layout, I'm able to write a title and that's it! There's no way to get into the body of the post where I can write and add pics. This is why I'm now having to post to this new blog using my cellphone. I miss my old blog. Also I'm not seeing a way to add a blog roll or even to put a follow button! So just bear with me, this all might be temporary. I'm going to see about getting wifi again and that may help in fixing all of this.  Let's talk about stitching! After a few more stitching on Crone on the Hill by PSS...       I stitched that portion of the house with the tiny window, I moved onto Halloween! I just finished this last night.. From the JCS September/October 2009 issue. I fo
Read more 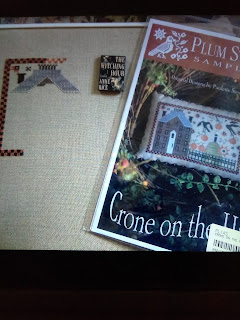 Hi all! Well, I have started this new blog since I couldn't find a way to sign in to the other one. It's a huge mess because the email I used to sign up is not used any more and the log in info is lost. So I'm going to see how this goes using my phone. I don't see how I'll be able to upload pictures either but maybe..oh I see how to load pics now! Well, here we go!  I had a new start last month, by PSS  It's a little blurry because I took the picture from off my iPad. I'll have to start taking pictures with my cell. Anyway I am starting to build the house. Next up is progress on Frosty Forest.. I finished that 4th block with the greenish house and just kept going! The border of the Frosty Forest block was mind numbing but once I got the pattern in my head, it went fast. I have folded it up and put away to stitch on next year. So my Harvest Halloween exchange partner received my package to her.. I bought her a Lucy Beam/Becky Noland project bag and some trims
Read more

A freebie of a month! 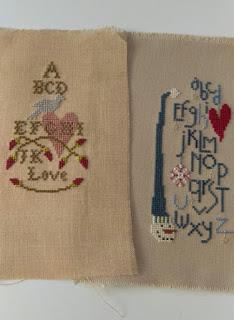 Hello! How is everyone post-Thanksgiving? My daughter, her boyfriend, and I did Thanksgiving at a local restaurant and it was fine. There were lots off other people doing the same thing! It is weird to not have leftovers though. Sometime in December I will roast a turkey breast. So I have some finishes and progress to show on this second to last day of November. Let's go! Last post, I mentioned stitching some ornaments. Well, I managed to stitch two! Here they are.. On the left is an untitled freebie pear from Marni (spelling?) at Santa's and Samplers at her blog. I have a printout of the design and I wasn't sure if it was a holiday design or not. What the heck, I'll stitch it and see how it looks. There's the red of the flower buds and green of the flower. Christmas colors! Works for me! I may make it an ornament in a pear shape. On the right is Sampler Winter, a freebie found at makestuff-behappy.blogspot.com. I didn't center this very good so I had to leave o
Read more

An Arizona Stitcher I